Are you as tired of hearing about the Bag Lady's lard rendering as she is of doing it?

She finally got the second batch of fat cut up and into the oven to render overnight. Here are a couple more pictures of what she's been dealing with. (She promises these will be the last pictures of raw pork fat - honest!)

This is leaf fat from one pig. Leaf fat is internal fat that is found around organs like the kidneys: 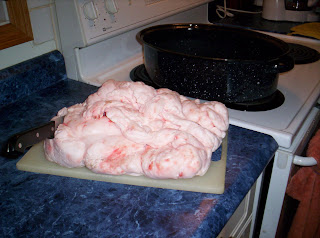 The Bag Lady cut it up and put it into her roaster, which went into the oven at a low temperature (200F) overnight. 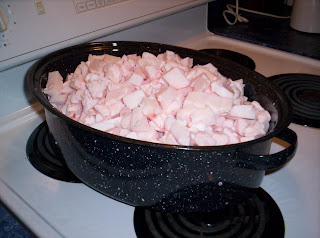 In the morning (in a little while, in fact, just as soon as she's had coffee!), she will take it out, strain it and put it into loaf pans to solidify. Then she will cut it into one-pound blocks, wrap it, label it and freeze it.

She made pastry with some of her home-rendered lard and she is happy to report that it is absolutely delicious! Even the Rancher commented on it, and he is not a huge pastry fan (he is one of those crazy types who prefers the filling to the crust!) She was going to post a tutorial of making pastry, but thought she would save that for another day. Like, umm, tomorrow. 'Cause otherwise, she won't have much else to post about. 'Cause, umm, her life has been consumed with really boring stuff laundry and housework lately.
Posted by the Bag Lady at 12:01 AM

But laundry is always interesting!

Why did you freeze your lard? Or did you not freeze all of it?

I always think of it this way:

Even if laundry is not particularly interesting, the fact that it is always there is job security. :)

I am going to guess that you freeze the lard for the same reason I freeze the bacon grease when I get ahead of how much we use regularly (which does not happen often). It is to keep it from going rancid before you can use it all up.

Glad the lard is making the pastry taste so good! Our ancestors knew what they were doing. They ate food that the body recognizes as real food, not chemically processed junk, and they worked it off, the way you do, gardening and feeding the animals and such.

Thus, I won't get bored reading about these things, and you will probably outlive me with the hard working ranch life you lead.

I don't think I know another person who works harder than you at a more diverse array of tasks. You're quite the talent, my friend. :)

Mary Anne in Kentucky - I froze the excess. It apparently keeps in the fridge for about a month, so I refrigerated some, but had to freeze the rest.

Messymimi - You're exactly right - it will keep in the freezer for about a year.
As to the rest of your comment, I'm not so sure about out-living you! You probably lead a much healthier life-style than I in other areas! :)

Hilary - aww, thanks! I'm not so sure about the talents part - perhaps it's just foolishness (and I don't tell y'all about my failures!) :)

Yes.I am tired of hearing about lard. I need you to render some off my rear end.

I got a little qeasy reading this post. I have to go to the lab and cant have anything in my stomach OR coffee prior to the echocardiogram this a.m.

Though I don't think looking at pig fat later in the day on a full stomach of split pea soup would make me less queasy.

Are you sure it's the pig fat making you queasy? It's probably lack of coffee.
But just in case, I promise I won't post anymore pictures of pig fat. At least, not today.

I love pie crust. Will definitely have to try making some with lard.

To answer your question - No. Have not found a pound cake recipe yet. I've looked at some but having never made one before I'm not entirely sure what I should be looking for. The next couple of weeks are looking kind of busy, but after that I'll have to settle on a recipe to try out.

That's a lot of hog fat. Good for you for doing this and I know how rewarding it is later on. BTW, I, too, am one of those weirdos who prefers the filling, but without stellar pastry it's just not the same.

JavaChick - you will be rewarded greatly if you can find some fat to render into lard! The flavour is just so much better!! (I'll keep an eye out for a pound cake recipe for you.)

dfLeah - I think I was spoiled when I was younger because my mom made such fabulous pastry!

I am of the personality type who saves the best for last, and last night, hubby was eyeing my pie crust rim with lust - something that has NEVER happened before! (I am ashamed to admit, I was prepared to defend it with my fork....)

How much fat was that in poundage?
I find it creepy to see a big old pile of fat...makes me want to go eat a bunch of veggies :).

Geo - it IS sorta weird to see that much fat, isn't it? I haven't finished processing the one in the photo yet, but the first one yielded between 7 and 8 pounds of lard. Enough to keep us in pastry for a very long time!

I am ridiculously excited to read your tutorial!! And, weirdly, no I am not sick of reading about your lard rendering. I love it when you post stuff about the ranch! Plus you're so punny:)

Charlotte - aww, thanks. (Now, if I can just remember to take the rest of the pictures I need to finish the tutorial, because I had a bit of a screw-up yesterday and didn't want to admit it, so stopped taking pictures.....)
I'll try to have that tutorial up tomorrow! :)

Wow, that should be enough lard to last you ...well, a good long time anyway :)

Reb - I think I'll end up with around 15 lbs, give or take. I'll give some away, of course.... I promised some to my MIL.
But it keeps a long time in the freezer.

Here I thought I was being so domestic today, making my own chicken noodle soup from scratch and yet again you are out-doing us mere mortals.

I have to say that the picture of the fat on the cutting board made me feel a teensy bit woozey...the cut up stuff in the roaster not so much.

So do you just use the lard for baking pie crusts? What else do you do with it? Am I losing it or did I read somewhere that you can make soap with it?

Scrumpy - did you make the noodles from scratch, too? :) I have to confess, I rarely make soup from scratch. I don't really like soup very much. *gasp*

Cheryl - Cutting up all that fat made me feel a little woozy.....
:)
I use the lard mainly for pastry and biscuits, but it can be used for other types of baking. I also use it for frying occasionally.
(Chicken fried in lard is wonderful!)

I love how EVERYTHING on the animal can be used for something!