The days are getting shorter and cooler, and the nights are feeling downright cold around these parts. The Bag Lady wants to crawl into bed and pull the covers over her head until spring. But she can't. She has too much to do.

She still feels as though she does not quite have a handle on this working and trying to maintain her house! She was running a little late the other day and it was raining, which would have made her hair go frizzy because she has to stand there and hold the nozzle in order to fill her tank, so she decided she would gas up her truck on her way home from work.... except that she didn't remember to do that until she was several miles past the last open gas station. *Sigh*. The warning light came on in her truck when she was about a mile from home. She can drive roughly another 20 km once the warning light is on.

She mentioned it to the Rancher when she got home, and was prepared to leave a little earlier yesterday so she could fill up on her way to work. When she got out of the shower, she noticed that both the Rancher and her truck were missing! He had taken it to the little convenience store close to the ranch and put enough gas in it for her to get to town. How nice was that?! She's starting to wonder if there has been an alien visitation while her back was turned!

She has taken several pictures of the river valley in it's autumnal splendor, but she hasn't had time to download them from her camera. Hopefully she'll get to that sometime this week. In the meantime, here's a picture she took the other day. She turned off the highway onto the gravel road that leads to her house, and was startled to see this burgundy-red bush. The picture doesn't quite have the same impact as the sight did in reality, but it's the best she has to offer today! 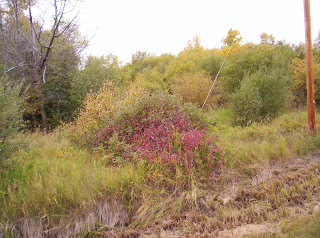 Clicking on it to enlarge it helps give you a better impression of how pretty it is.
Posted by the Bag Lady at 12:01 AM

I LOOOOVE when the husband surprises me like that.
one of my fondest memories is of a FRIGID morning (ok, for Pa.--maybe not for where you live :)) when I was rushing for work and putting on a suit etc and I glance out the window and he was outside scraping my car off (ice) and warming it up.

Those kinds of gestures are truly love, huh?

Very sweet of the Rancher. Sometimes they do surprise us this way, and it is very endearing. (Maybe if they knew how endearing, they would do it more often!)

Very thoughtful of the Rancher.
Meanwhile, that burgundy bush is lovely.
I, too, wish I could sleep until spring, but cold weather is good writing weather.

What a lovely thing for the rancher to do!

And I love that splash of color--so cheerful!

I would love to have a husband to surprise me like that!
Or a stranger at this point in my life.

That was very sweet and I think an alien has come to visit.

A very sweet gesture by the Rancher. He sure know how hard you've been working. Thanks for sharing the burgundy bush.. the leaves sure have begun to turn.

Thanks for the burgundy bush. I was too lazy to take the camera with me when I walked down to the creek yesterday--keeping my balance on the steep hill is hard withOUT something hanging around my neck.

How sweet! And please please please post some pretty autumn pictures! It's still so green and warm down here that I'm having withdrawals. In fact, I wrote a blog post about it last night (haven't put it up yet).

Every once in a while Husband surprises me like that too. Guess I'll keep him. :)

The whole keeping house while working thing is a challenge. I've been working full time for quite a few years now and I still haven't figured it out. Always too many things to do...

Miz - yes, I think it is a sign of love (either that or he didn't want me calling him to come rescue me with a jerry-can full of gas on the side of the highway!)

Messymimi - he actually has been doing some sweet things lately - it's nice!

Thanks, cousin! Maybe this is his way of showing support for the fact that I'm working.

Crabby - thanks. I was so startled by the color in that bush that I had to back the truck up and take the picture!

POD - I'd send you this particular alien if I could, but I'm kinda liking it. Until, of course, the arm shoots out of his belly, or whatever the hell is going to happen!

Hilary - the leaves have REALLY turned here - it's -9C again this morning!

Mary Anne in Kentucky - I have trouble keeping my balance on flat ground. Sigh.

Gena - I'll try to remember to bring the camera in from my vehicle tonight so I can download the pictures!

JavaChick - I worked full time for over 20 years and never had this much trouble feeling organized! (Oh, wait, I was a lousy housekeeper then, too!) :)

So glad the rancher is stepping up and treating the Bag Lady a bit!

It's the little htings that make it all worthwhile isn't it?
Don't work too hard :)

beautiful pic. thanks for sharing.

as to the husband thing... i can't imagine mine doing something without being asked. you have someone good there.

And that reminds me, I should let my husband drive my van this week, because I love it when he tops off/evens out the air pressure in the tires...

The only thing turning reddish around here is the "burning bush" in front of the middle school. I think it's pretty.

Ah, what a nice hubby. after hearing you talk, i'm very convinced that cowboys are the way to go!

i love chilly, crisp autumn mornings! brrrrrrr... it's getting cold! love it.

Those things are definitely the ones you appreciate the most!

Fall is the best time for really beautiful nature shots. But it IS getting cold! Seems as though summer went by in about a second. Boo.

Nice of the rancher to fill you up and that bush is lovely.