Yesterday morning, the Bag Lady watched as one of the cows calved. (Not unusual, considering it's calving season on the ranch!) The cow had been wandering the ranch, looking for a suitable spot, with another cow dutifully following along behind. She finally settled on the perfect place and got down to business.  The Bag Lady strolled down a little later and took a picture: 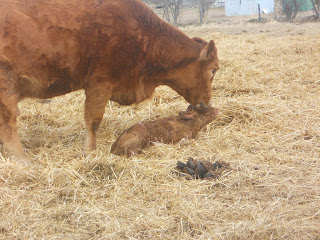 Late in the afternoon, she glanced out the window and saw the cow still in the same spot, still licking her calf..... then thought to herself, "wait! That's a newborn calf....."
The cow that had been following the first cow had decided that the spot chosen was absolutely perfect, so had her calf in the same place! The confusion arose because, at a glance, the cows are identical. Upon closer inspection, it was discovered that, although the cows are very similar in appearance, the calves are quite different. They may be the same colour, but the one born in the morning is a female and the later one is male. 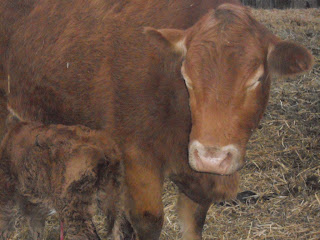 And one more tiny difference.... the calf born in the morning has two white feet and a teensy tiny white mark on her face! 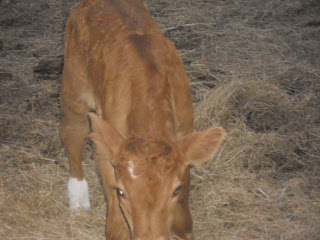 The Bag Lady is having difficulty deciding what the mark looks like.... what do you think it resembles?
Posted by the Bag Lady at 9:02 AM

It looks like a reverse Nike symbol. I'd name him Ekin. ;)

And congratulations on the new calves.

Hilary - you crack me up!

Leah - thanks! I does kinda resemble a seahorse. AND a reverse Nike symbol. Does that make it a sea-ekin?

It's a sweet little mark, and will hopefully prevent the calf from running out and getting a tattoo or nose piercing as a teenager.

Crabby - she will eventually have a pierced ear, though, and so will her half-brother! :)

I'm giggling over all of the comments -- yours and others! When I saw the picture on facebook, I also thought it looked like a Nike symbol (but I was too tired from my weekend to see that it was reversed).

That must be a really good spot. Let's hope it produces good calves.

(The latest county agent newsletter is urging us to "select your fly protection now, but do not insert ear tags until flies are observed." Flies have been out since February in this weird spring!)

Karen - just between us, I didn't even notice it was the Nike symbol, reversed or not!

Mary Anne - you must use ear tags for a different reason - ours are strictly for identification (they have a barcode in them, and are registered in our name.)

looks like Clark Kent's curl of hair he has when he's not Clark Kent!

which would be Superman...sorry that made no sense! Time for more coffee :)

Beautiful calves, and the first thing i thought of when i saw the mark was a tadpole.

Bag Lady, around here cows have two ear tags: one ID and one insecticide. I'm not sure exactly how it works, but it must be something like tick collars for dogs.

Thanks, messymimi - tadpole is more politically correct than Reb's suggestion!

Mary Anne - we don't generally need the insecticidal tag. Lots of the cows around here end up with more than one ear tag, though - the gov't-required tag leaves no room for any kind of numbering system that ranchers may use for their own purpose.

Interesting mark and wonderful to see pictures of this.