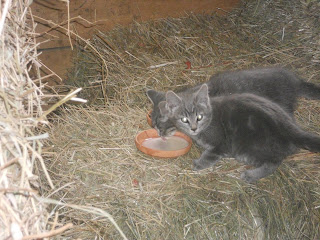 The Bag Lady was on her way somewhere the other day and happened to see this bird on the side of the road. There were actually two, but the one on the other side of the road was quicker at getting out of the way. The Bag Lady thinks this is what is referred to as a partridge in these parts. Or it could be a prairie chicken. It's definitely some kind of grouse. 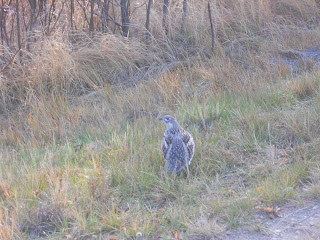 After she took the picture and went on her merry way, she spied a coyote at the end of the road. She hopes he didn't see the grouse. She is choosing to ignore the fact that later on in the day, traveling on the same road, she spied a pile of feathers.
Posted by the Bag Lady at 7:42 AM

Ahh the cycle of nature. In the wild, it happens all the time. Under our care, we can have control. I'm glad those adorable kittens are with your mother in law for now.

I suspected the bird was a spruce grouse so I checked and found I was right. They're officially called boreal grouse in that neck of the woods. It's a girl so to me it's a fool hen.
I sure hope you wanted to know all this.
Good pics.

Ah, kittens! Surely the Princess isn't jealous because she wants to catch all the mice herself?

Slow birds are slow; thus, they become piles of feathers.
Last week I saw a turkey vulture corpse in the middle of the road. "Greed kills."

We don't have any grouse here though I do a lot of grousing.

Those kittens are adorable!

We once had a cat we couldn't keep (on the move for 4 months through a dozen states). Gram was happy to have a barn cat, but it was mostly white and liked to hunt at night. No feathers were left, but the cat disappeared... you often do have to blame the coyote in the circle of life.

The next barn cats were darker like those cute kittens.

One reason we don't have a dog, any foster kittens would just be a great snack temptation.

Do yourselves a favor and spay/neuter the cats early. That way you don't end up with an overpopulation problem.

Love all of Leah's extra info :)

Yep, it's the circle of life, so to speak. Sad but true.

The kittens are adorable and I'm sure they're much happier not having to worry about the Princess.

I loved Leah's little lesson on grouse, too.

Cute kittens, silly Princess! Nice bird, thanks Leah for all the info. Too bad about the coyote and the pile of feathers though.