The Bag Lady happened to glance out the window the other day and caught sight of a coyote in her front yard. She grabbed the camera and tried to take a few pictures, but the coyote was a little too far away, and the resolution isn't very good. 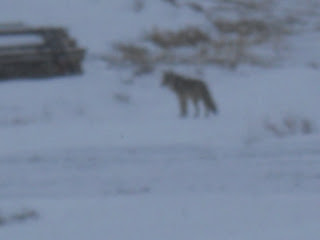 The coyote was attempting to hunt mice, but the snow had a solid crust on top from the recent warm weather. He hovered, front feet in the air, then pounced! Then was forced to pounce again. The Bag Lady tried to take pictures of the pouncing, but wasn't very successful. The coyote, on the other hand, was eventually successful and managed to punch through the crust and snag a mouse! 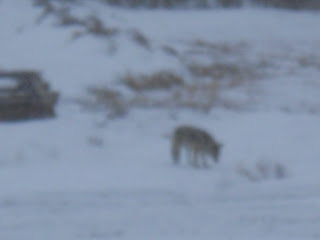 As the Bag Lady watched, another coyote came along and inspected the first coyote's catch, then continued on it's way. 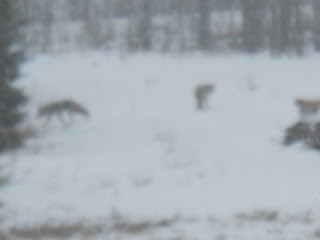 The first coyote continued hunting in the Bag Lady's yard and managed to catch at least one more mouse before moving on to another location. 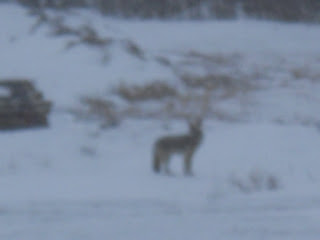 The Bag Lady apologizes for the poor quality of the photos, and wishes she had managed to capture some video of the coyote hunting, but, sadly, she didn't.
Posted by the Bag Lady at 9:50 PM

Very cool. You know, we've had coyotes right here in the park system for the past couple of decades and I've never seen one yet. EVERYONE sees them at least a few times a year.. everyone but me. Wily ole things!

Hilary - I just wish the photos were better.... they were just a little too far away!

Wow! I'm amazed they were that close to your house. Was Princess watching from inside, I hope?! We have been hearing their yodels the last few nights. They have quite the tunes!

That seems like an awful lot of work for just one mouse-bite. Not much nourishment there.

Redbush - luckily, the Princess was sound asleep and didn't see them! It would have driven her crazy.

Mary Anne in Kentucky - I agree, it seems hardly worth the effort, but I wonder if these were the same two I saw chasing the deer. They expended far more energy in that exercise in futility!

I love seeing all the wildlife in my area although there are a few, like the black bear and Florida panther that I'll be OK with never seeing while in their world :-)

I'm glad you got something of a capture. It's good to see coyotes.

Any pics that give the general idea are great. Coyotes and wolves can live on mice and other small rodents when they have to.

We don't expect you to be the Discovery Channel, you give us a glimpse into the beauty of your world, and I'm grateful.

Coyotes hunt mice? I think I like them on that basis alone!

You could feed Don to the coyotes. Then they would not have to look for mice in the cold snow.

I have a photo of wildlife from late yesterday. A big deer.

Wow - thanks for another installment of The Bag Lady's Nature Hour! hehe

BL,
I haven't been around in a while! These coyote shots are so cool but burrrrrrr all that cold and snow is making me wince! We are finally seeing signs of spring here in MN, in fact I've already been out on the motorcycle. I hope things warm up for you soon, but in the meantime, I wish you more of that free quality family entertainment. That's some good, good stuff right there!

Man, coyotes give me serious heebie-jeebies. That's awesome you took pics. I would have been throwing rocks and then running away in horror. I'm cool like that.

Thanks, Dr J - I love watching the wildlife around here, except when we are in the midst of calving - then I wish the predators would go elsewhere!

Leah - I just wish the photos had been clearer.

kcinnova - yup, that is one of the good things about them!

POD - perhaps we could feed your plastic deer to the coyotes....

Good to see you, Lucas! We had lovely mild weather for several weeks, just before spring officially arrived. It's been wintery ever since! Sigh.

Charlotte - my throwing arm isn't that good.... the coyotes were quite distant (oh, and I was in the house, too!) :)