We Shall Always Remember

The Bag Lady has been attempting to write a post about Remembrance Day. She recently found her father's medals and wanted to share a picture of them with you, but is still having computer trouble and cannot get pictures to load properly. Sigh. In the meantime, here is a link to her post from last year for those of you who missed it.

She hopes that everyone will take the time to observe two minutes of silence at 11 am to remember the men and women who have given their lives in the service of their countries. Two minutes seems hardly long enough to show our respect and appreciation for these brave men and women.

(She held her breath and tried one.last.time! and it worked! Here are her dad's medals for service in the Second World War.) 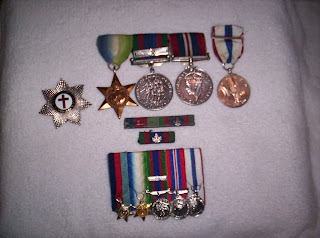 Edited to add.... upon further inspection, the Bag Lady now thinks that the pin on the left in the photo is not from her dad's military service. The bronze coloured star is the Atlantic Star (he was in the navy, and served in the Atlantic Theatre), the medal next to it is for voluntary service. The third medal on the bar is a mystery. The medal on the far right is a commemorative medal, dated 1952 - 1977.
(the small medals at the bottom are replicas of the larger ones)
Posted by the Bag Lady at 7:50 AM

I will take the time to remember.
Meanwhile, I am woefully inadequate when it comes to reading medals. Can you tell us what those medals are for?

I remember that post, Baggie. I'm grateful for your father. I'll be taking this time to reflect and say thanks too.

dfLeah - to be perfectly honest, I'm not sure what the medals signify. Must put my reading glasses on and try to figure them out!

Hilary - Thank you. I know where your heart is today!

Thanks for your father's service.

dfTerrie - thanks for stopping by! I am very proud of my father's service.

Thank you.
I will take the time to remember...

I too wonder what the medals stand for.

I'll be finding a few veterans at my job today to say thank you to. There are many words that describe veterans including brave, courageous, selfless, heroic, and humble. Most of them are so humble they don't even want to bring up the fact that they served.

Sis, glad you got the photo to load. I am not sure dad ever told us what the medals were.

Geo - I'll try to find out what the medals symbolize!

Reb - not to my knowledge.

Baggie, I am glad you shared those medals with us.
I'm sorry I did not remember the 11 o'clock observation, but I will be observing for about 90 minutes or more this evening -- and I am wearing a poppy close to my heart today.

My Grandad Howell was in WWI as a gunner on the front lines, and thank God he returned without injury.
Did you take your picture to the memorial service today..? any vet in attendance (with a mag glass perhaps needed) would have been able to give you a read on all the medals....
if you didn't get info...I will print your picture and have a good friend (84 years old) who served in the RCAF fill us in..seeing her tomorrow, but we are off on vac. for two weeks.. keep it warm and no hurricanes in NO please...will get back to you early Dec.

kcinnova - I'm glad to hear you wore your poppy today!

Hi, cuzzie - I would love it if you would take the photo to your friend! I was going to try to research it on the 'net.....

Thank you so much for sharing this photo. Looks like your dad did a great deal to serve his country.

That's a whole lot of medals. He sounds like such an amazing person.

Sagan - he truly was. From farm boy to President of the Canadian Dental Association.... he was quite a guy. And a terrific dad, on top of everything else.

BL - I took my Grandpa's tie tacks that his work gave him over the years, made a nice little pillow, pinned the tacks on and put the entire thing into a nice shadow box. My Grandmother loved it. Just a thought in case you decide to do anything with those medals. Thanks do your Grandad for serving. All vets deserve our honor and respect.

Thanks for the suggestion, Lucas! I am going to do something similar with these - just have to decide how best to display them!